If you are one of the big fans of those classic galaxy shooting game series (a.k.a galaxy shooter / space shooter / shoot ’em up / space invaders / galaxiga / galaga/ ), Galaxy Invaders : Space Shooter will clarify your feeling with those game series. The classic game style, but the new way of expression will fascinate you while you play. Galaxy Invaders Attack – Alien Shooter will bring you new enemies and bosses in the Galaxy War. Do you think you have enough skills to survive this epic battle with these alien invaders?

HOW TO PLAY
– Touch the screen to move your spaceship (up, down, right, left) to Dodge enemy’s bullets
– Collect as much as coin and game to upgrade or evolve your spaceship to fight with giant enemies and alien invaders.
– Using booster or power-up to level up easier.

FEATURE:
– 80+ offline levels with full of alien invaders and bosses.
– 10 different spaceships and drones with various power up. Let’s choose the best one for you. Commander!
– 3 mode play from easy to difficult.
– It is all FREE and No internet connection required Need (Playable OFFLINE, Play without WIFI)!
– Pixel retro graphic interface to bring your experience back with 80s & 90s retro game.
– More attractive modes: Experience & discover the galaxy shooters with difference modes like Endless, Tournament… and gain more rewards & excitement.

Commander…Commander!
Our galaxy is under invasion by alien shooter attack! WE NEED YOUR HELP
The Galaxy attack team is waiting for your command!
Please command the ship to protect the galaxy invasion and asteroids

Our Galaxy future is now under your hands. Get your spaceship ready for the space attack from alien invasion galaxy shooter. 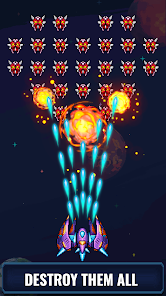 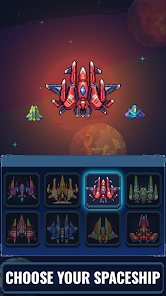 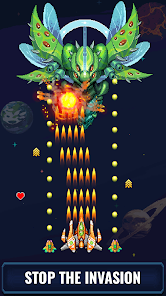 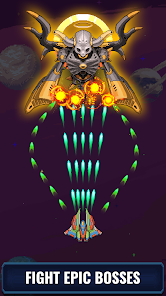 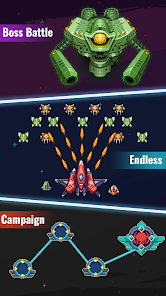