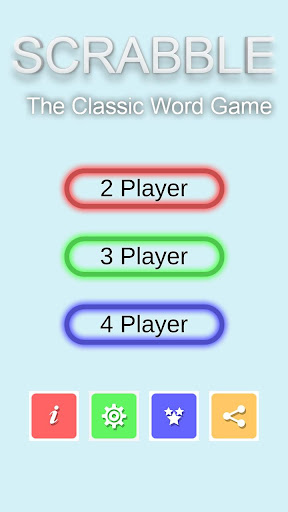 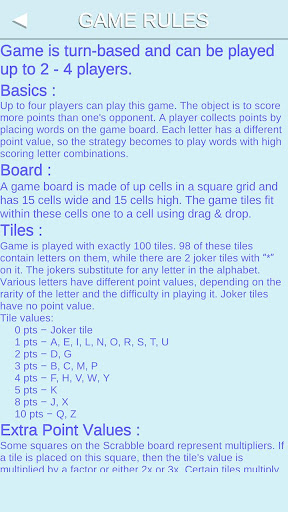 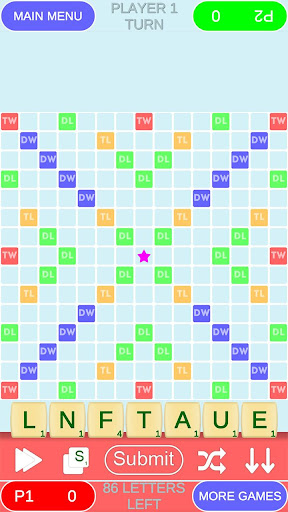 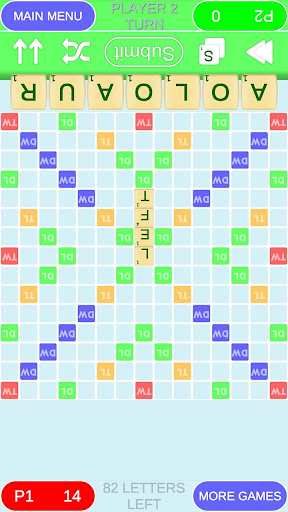 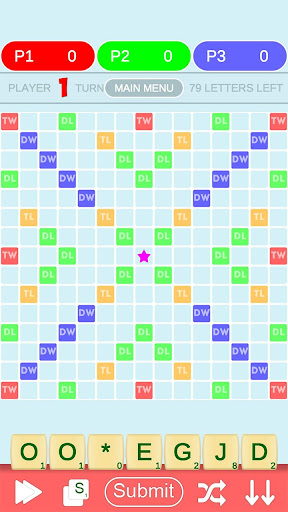 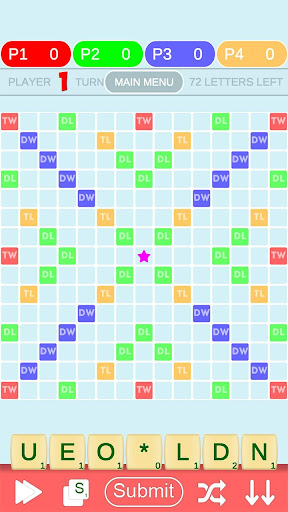 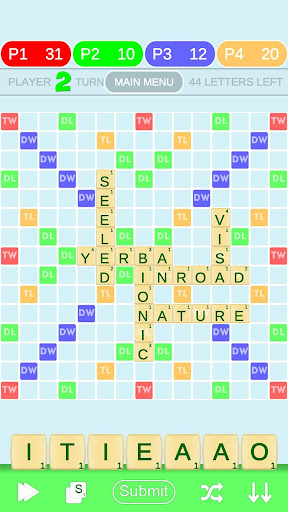 SCRABBLE – The Classic Word Game is turn-based and can be played up to 2-4 players.

Basics:
Up to four players can play this game. The object is to score more points than one’s opponent. A player collects points by placing words on the game board. Each letter has a different point value, so the strategy becomes to play words with high scoring letter combinations.

Board:
A game board is made of up cells in a square grid and has 15 cells wide and 15 cells high. The game tiles fit within these cells one to a cell using drag & drop.

Extra Point Values:
Some squares on the Scrabble board represent multipliers. If a tile is placed on this square, then the tile’s value is multiplied by a factor or either 2x or 3x. Certain tiles multiply the point value of an entire word and not simply the tile on that space.

Double Letter Scores(DL) – Green cells are found isolated on the board. When a tile is placed on this space, that tile’s point value is multiplied by two.

Triple Letter Score(TL) – This is a yellow cell on the board. The tile placed on this square has its points multiplied by three.

Double Word Score(DW) – Blue cells are found running diagonally towards the four corners of the board. When a player plays a word on one of these squares, the point value of the entire word is multiplied by two.

Triple Word Score(TW) – This is a red square on the game board. These are found on the four sides of the board equidistant from the four corners of the board. When a word is played using this square, then the points for the word are multiplied by three.

Note that extra point squares are only usable once. If one player plays a word using this cells, then the next time that space is used to make a word, the point value is not multiplied.

Game start:
At the game start each player receives 7 random letter tiles. Game starts from first player. The player can do one of three things on a turn. The player can place a word, exchange tiles or pass. Most of the time, the player will take the option of playing a word.

Exchanging tiles allows a player to replace anywhere between one and all of the tiles on the player’s rack. If this option is taken, the player cannot do anything else that hand. Therefore, a tile exchange cannot be performed on a turn when the player places a word on the board. A player may pass at any time.

A player begins the game by placing a word on the square at the center of the board.

Accepted words:
Players may place any word which can be found in a standard English language dictionary.
Update Dictionary.
Game Control.
Fix Bugs.